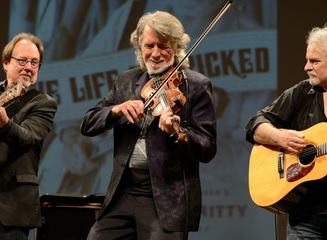 A Nitty Gritty Dirt Band founding member in 1966, John initiated the 1972 classic Will the Circle Be Unbroken album, (inducted in to the Library of Congress as ‘one of America’s most important recordings). Proud of being an integral part of America’s first band to go to Russia (28 sold 0ut shows in 1977!), John’s love of performing has been evident since his teenage Magic Shop days in Disneyland. McEuen’s show takes us ‘behind the curtain’ of the music world that so many of us know of only as listeners and shows us how we have all been a part of it, more than we may know.He has earned Emmy nominations, Grammy Awards, CMA acclaim, The Western Heritage Award – other accolades are on his website: www.johnmceuen.com.