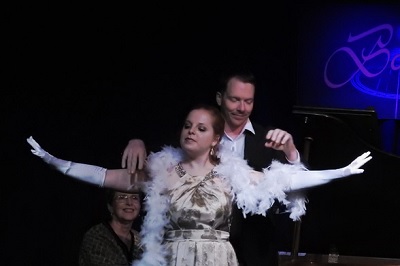 The C & C Show with Mary Dibbern, featuring soprano Courtney Stancil and tenor Christopher Leach, will be returning to the Bowery Stage on September 12.  They first performed as a group on the Bowery Stage as part of the Sunday Classical Series in 2018.  Pianist Mary Dibbern, a specialist in vocal accompaniment and opera coaching, has performed here numerous times. She has been Music Director of Education for The Dallas Opera since 2012 and is also Artistic Director of Secular Music for St Matthew’s Cathedral Arts. After graduating from Southern Methodist University (MM in Piano Performance), she moved to Paris, France, where she studied with Nadia Boulanger and Pierre Bernac, Gérard Souzay and Dalton Baldwin. Dibbern has long been in demand for vocal recital collaborations and recordings, and she has authored eight books on French composers.

Soprano Courtney Stancil, a native of Houston, Texas, received degrees in Vocal Performance from Sam Houston State University (BA, 2012) and Southern Methodist University (MM, 2015) where she performed in major roles in a variety of musical productions. She has been engaged by The Dallas Opera’s Education and Outreach program for four seasons as a Teaching Artist and as Touring Artist in the Dallas-Fort Worth metroplex.

Tenor Christopher A. Leach (a native of Kingsville, Texas), performs regularly in the Dallas-Ft Worth metroplex with The Dallas Opera’s Education and Outreach productions including the title role of Doctor Miracle, Eddie Pensier (The Bremen Town Musicians), Miguel (Pépito), Don Giovanni (The Three Little Pigs), and Dandini (The Billy Goats Gruff). With the Fort Worth Opera, he created the role of Senator Ralph Yarborough in David T. Little’s opera JFK (2016). Leach is active as recitalist for a variety of groups in the metroplex.

The trio will be recording their first CD together in the fall of 2021, a collection of songs by American composer Mary Howe, produced by Toccata Classics (London).