At Depot in Downtown Winnsboro
Corner of Main and Highway 11

Pottery of Winnsboro, April 30th at the Museum

The historical series honors the Winnsboro local heritage through historical stories of generations past.  Join in the fun on April 30th for a “Come & Go” guided tour of the pottery history, potter’s wheel demonstration, and hands on clay molding experience.

This is a free event and ages are welcome. 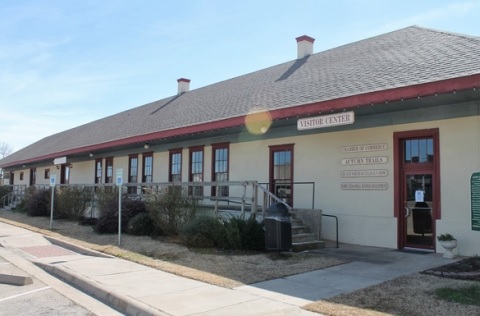 The Winnsboro Debot was first built in 1878 as western-style construction of wood with tracks on both sides and a long platform for agriculture commodities.  Although a fire destroyed this building in 1907, it was rebuilt to a new “modern” look in 1908 by the Katy system, complete with a concrete base composed of stucco and wood.

In the early 1900’s there were 3 passenger trains that stopped in Winnsboro at noon each day – one from the east, one from the west, and another from Marshall, which used the side tracks on the north side.

Winnsboro had an excellent reputation for fine food, hotels, and boarding houses which is part of our reputation even today.  It was quite common for younger residents to ride out to the Depot in their carriages and buggies on Sunday afternoons, wearing their Sunday best, to watch the 4 PM passenger train arrive and depart just to see who was coming and going.  Even though that was the social event, the Depot never closed.

Telegram messages were received and transmitted 24 hours a day.  A hand signal was perched on the outside above the office near the tracks and was managed by the dispatcher to signal the train engineer of either an emergency situation or to dispatch a pick up.  The dispatcher held a highly important job.  He directed the traffic, such as where to leave or pick up freight, or to let the engineer know about an emergency situation up ahead, such as a train wreck or a washed out bridge.

So many stories fill the walls at the Depot.  Some good and some tragic, but one thing is for sure, the building is still here to tell the tales of the past that become woven into the stories of our future.

Come experience history in the Winnsboro Historical Museum at the Depot.  Exhibits will change througout the year.